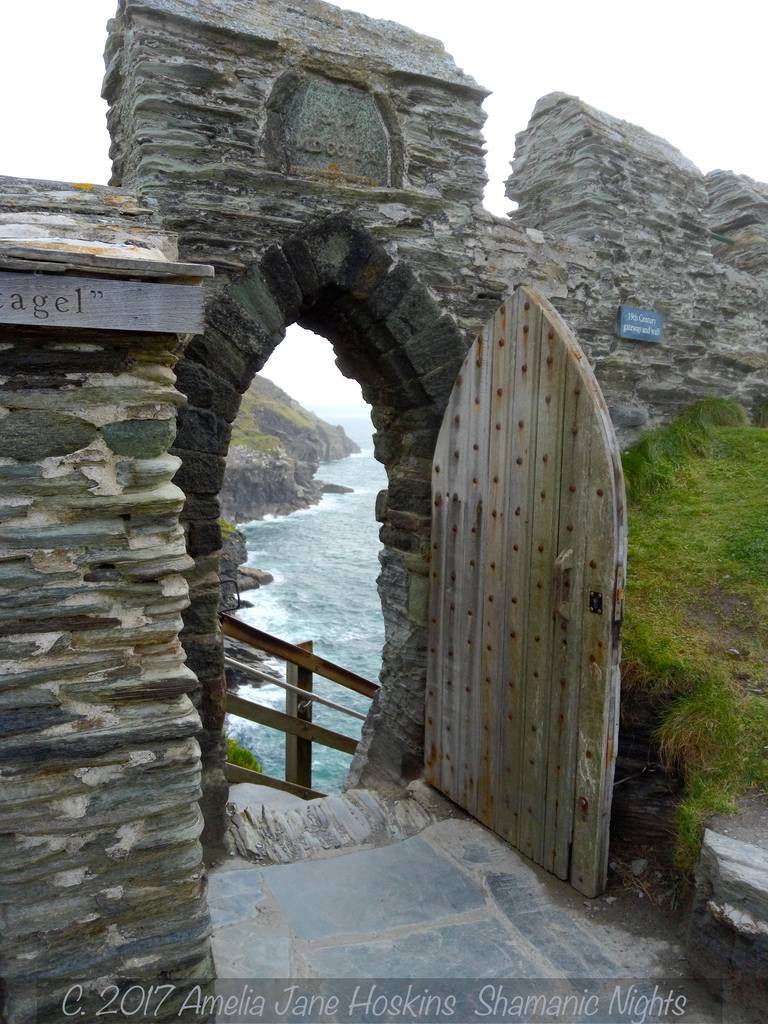 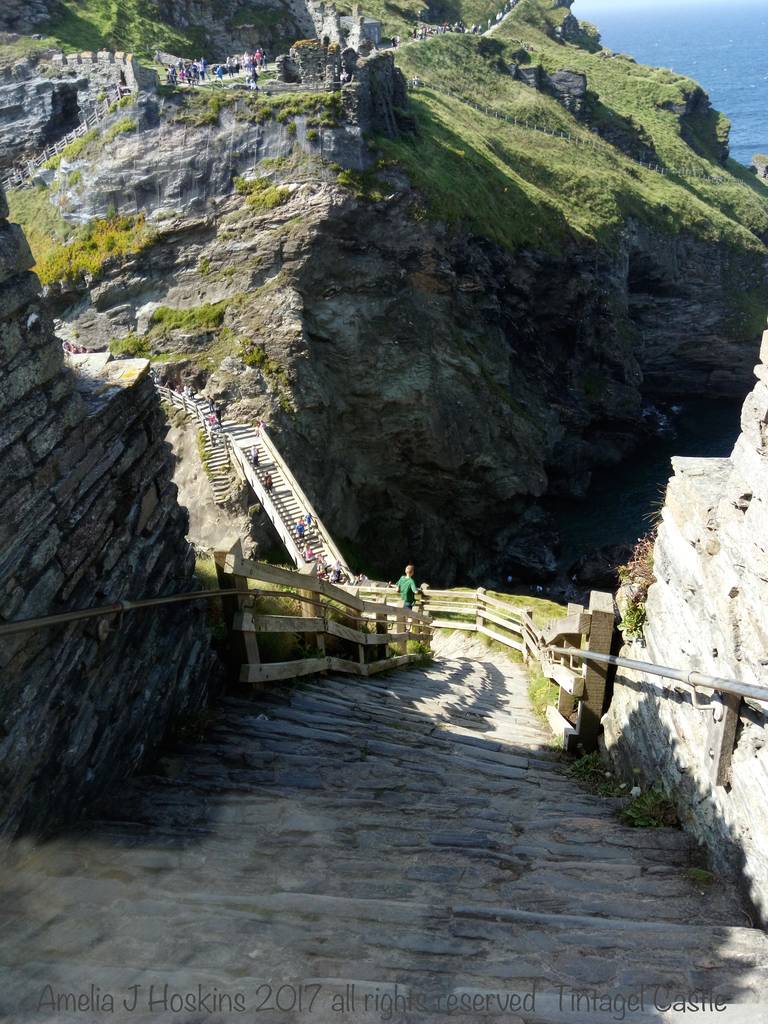 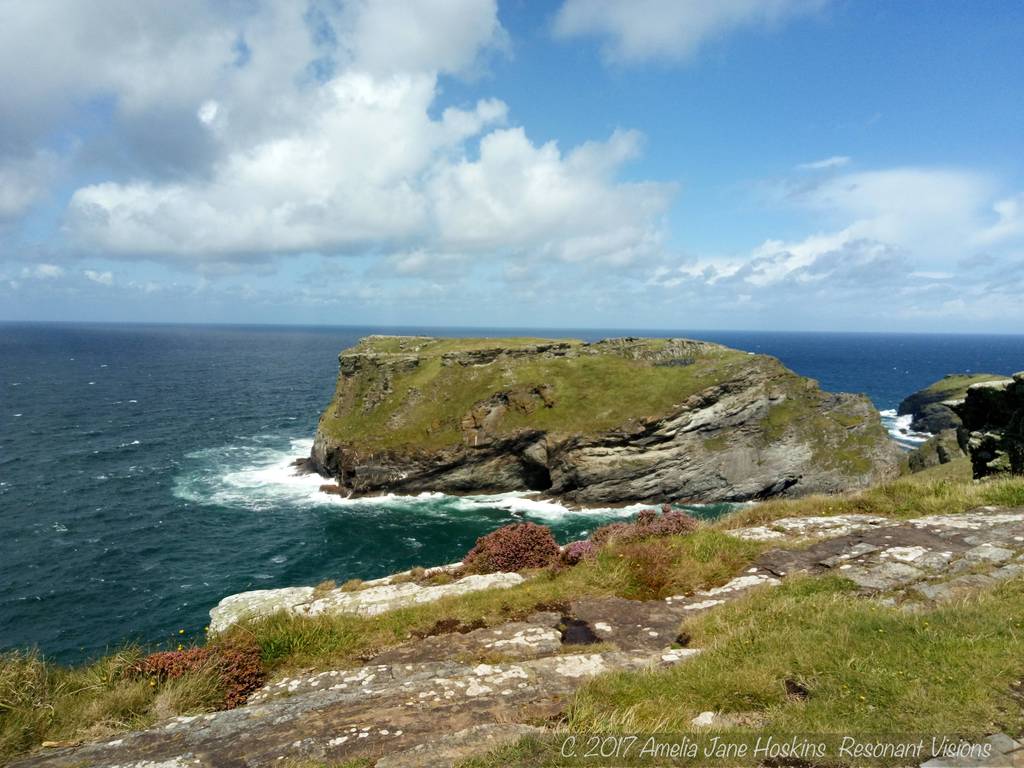 Tintagel Head is in a well protected prominent position, to view all ships approaching.  There is an old mooring on the north side deep harbour, used by ancient traders. Originally there was a land bridge from mainland to castle island before the rock caved into a ravine.  The many steep steps are seen in my photos, up both sides, mainland and the Head.  Climbing up the many steep steps carved out of the rock face gives a good idea of how difficult it would have been to breach the castle fortress.  The cave is reputed to be Merlin's cave; it tunnels right through the island from the beach at low tide, out to an ocean opening on the south side.  Part of the castle ramparts still exists on the mainland. (Since my visit, a modern bridge has been built joining the two sides). 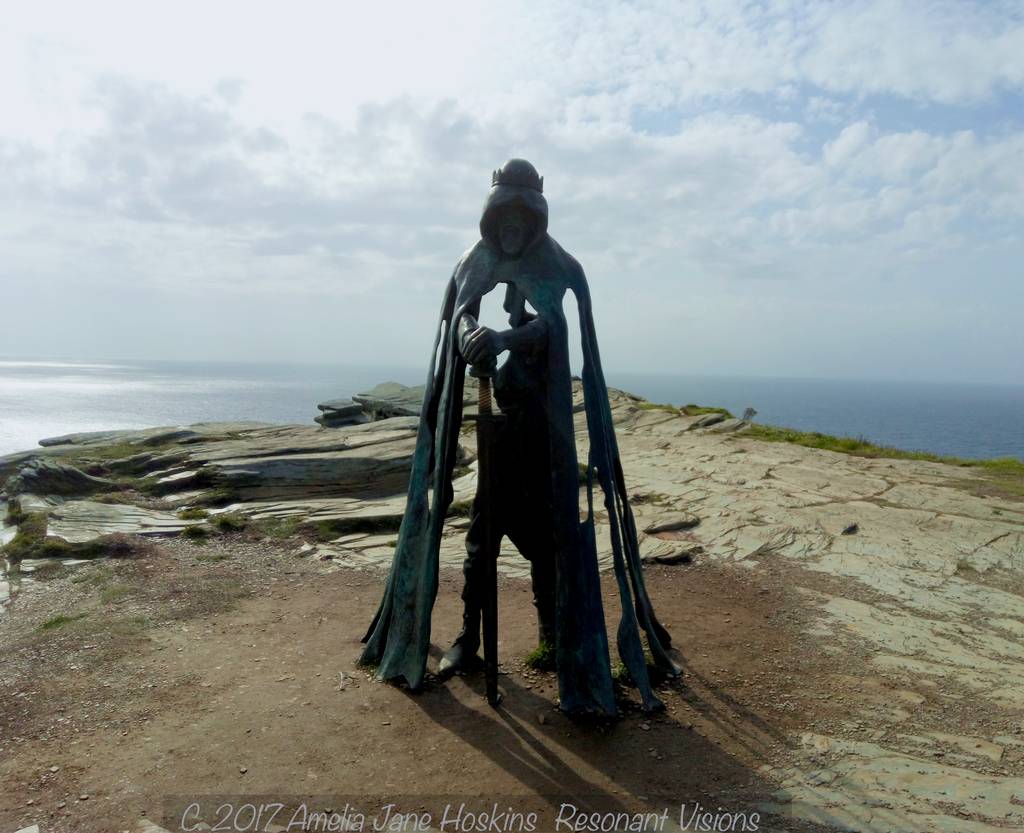 King Arthur sculpture is so designed that the winds play in the hollow spiral form inside the bronze ‘body’ sounding like a low voice. Visiting on a very windy day enabled me to discover this.  Arthur died 537 A.D.

Many legends associate King Arthur with Cornwall.  He was said to have been born in Tintagel, at the home of Gorlais, Earl of Cornwall. It was here that Uther Pendragon seduced Igerna, Arthur’s mother.  The castle ruins at Tintagel are 11th century, but there are signs of a much earlier settlement.  Merlin’s Cave is below the castle is known as and the magician is said to haunt it.  Arthur is said to be reincarnated as a Cornish chough.     https://www.cornwalls.co.uk/history/ancient

The Celts who arrived in Cornwall between the 6th and 4th centuries BC, constructed hill forts and some 40 cliff castles throughout the country.  This remaining castle they think was built by Kings in 1100-1200s but built on top of a pre-existing Celtic site.

Many archaeological finds of luxury pottery from the Mediterranean, Aegean and Africa and glass from Spain have been found, showing the long history of trading in the area.  Some historians believed it to have been a Celtic monastery.

The names of Celtic Kings are forgotten as the spinster Druid priests forbade writing!! but there are records from 300AD of the Kings of Dumnonia in the South West region.

There is a long and challenging history: in the 6th century, the Saxons “drove the Britons as far as the sea”: the one remaining Celtic territory became the Kingdom of Cornwall.  History shows several Dumnonian Kings being killed fighting the Saxons.  King Arthur of the Britons who is said to have been born at Tintagel, was killed in 537AD.

In c.807AD the Cornish people formed an alliance with the Vikings against the Saxons invaders but were defeated in 838AD.

Athelstan, c.895 was the first King of all England, including some of Scotland and Wales and Cornwall. 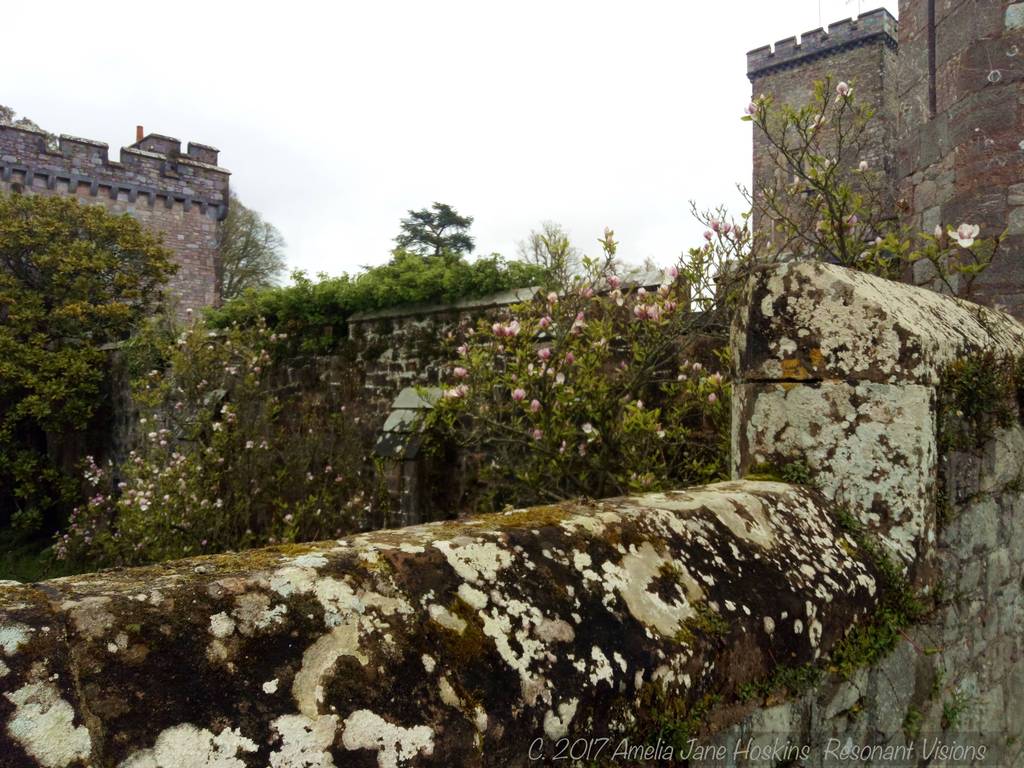 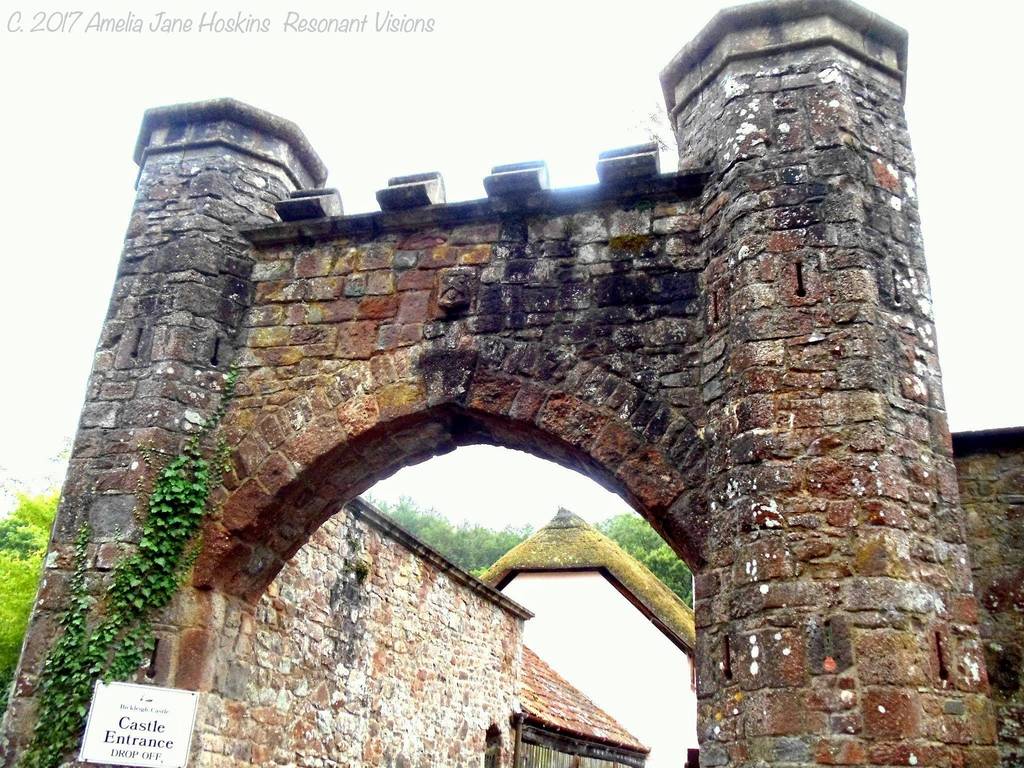 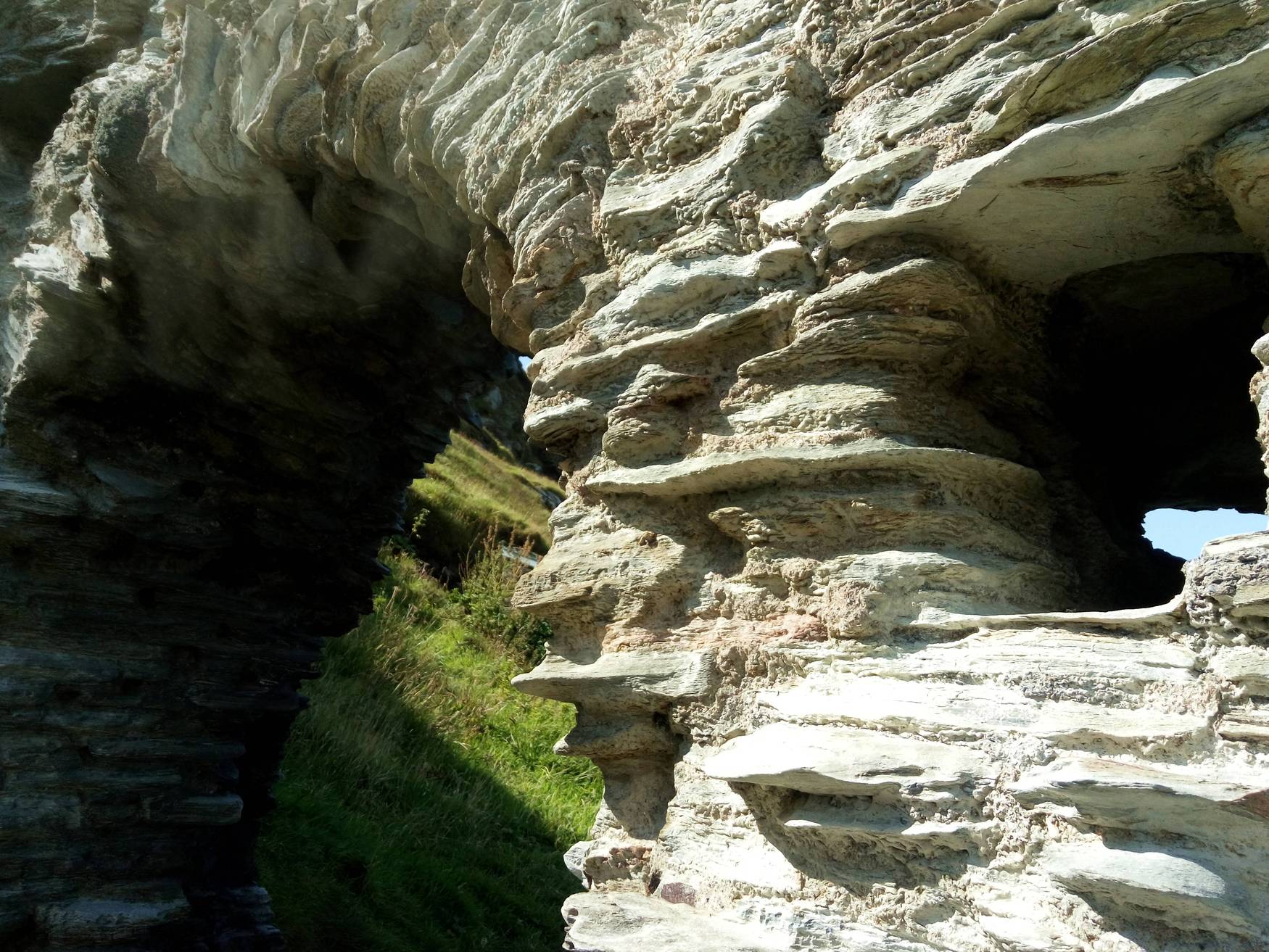