The 18th Century concept of atheistic science as Satan has resonance in 2022 with the emergent biotech developments towards an AI driven sci-fi transhumanist agenda, obviously a ludicrous wrong turn for science and technology.  Artificial intelligence companies funded by big tech already suggest their AI system will be a god, with the likes of Kurzweil talking of a church of AI. [link]  In 2021-2022 many believe big pharma is engaged with world elites in an experimental genocidal plan for a new globalised 'reset'.  It could be 'mass murder' as Peterson suggests is indeed coming with totalitarianism. 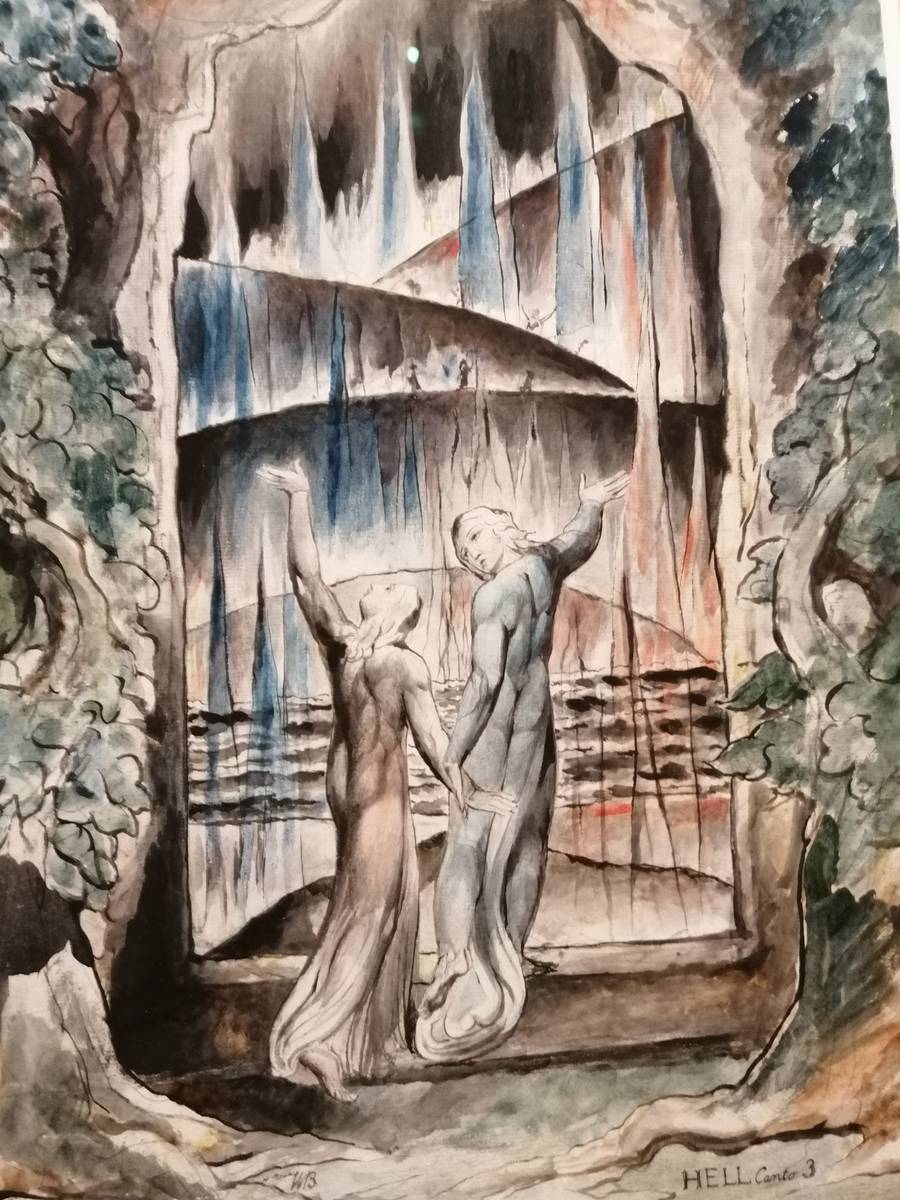 The doorway to the future awaits the couple showing a future of ascendency through hot and cold flames representative of 'heaven and hell' in life's reality.   Beyond the ocean of time, figures ascend the distant hills of development.  The painting is about Blake's universe of balance, expressed in 'contraries' which exist in counterpoint to one and another, that there is no progression without them.  In fact we can only identify one aspect because the other aspect exists.

"contraries and oppositions - love and hate, expansion and contraction, opaqueness and translucence, reason and energy, attraction and repulsion, these are the poles of his world, where Without Contraries is no progression."

In 2022 the world is becoming more totalitarian despite lessons from history on absolute power; a long way from the utopian world we could envisage in the 1960s.  Technocracy is in the ascendant and beginning to organise itself to remove freedoms to keep its power.

The larger you build a system the more there is proclivity to worship it as if it is everything; build as large as possible.  "tendency of the rational mind to produce totalitarianism and to fall in love with it, like the tower of Babel and nothing outside them is allowed to exist."

People know the balance has gone too far in favour of ruling technocratic oligarchies who have more power than governments.  We can look at the thinking of 18th Century writers and artists who were concerned how the rise of atheism after the rationality of the philosophy of The Enlightenment would affect society.

For Blake, his imaginative Urizen is mankind ruled by science. Poetry and figures of Urizen represent rationalised science of those believing to have god like capabilities to control humankind, which Blake, like Milton, envisioned with pending doom for humanity.

'Urizenic Rationality itself is the program that has been expelled from Eternity, through challenging the role of the “transcendent function”, as Peterson suggests, and decides instead to create a world in its own fallen image: the world of Representation and Division, over which it can have power.' 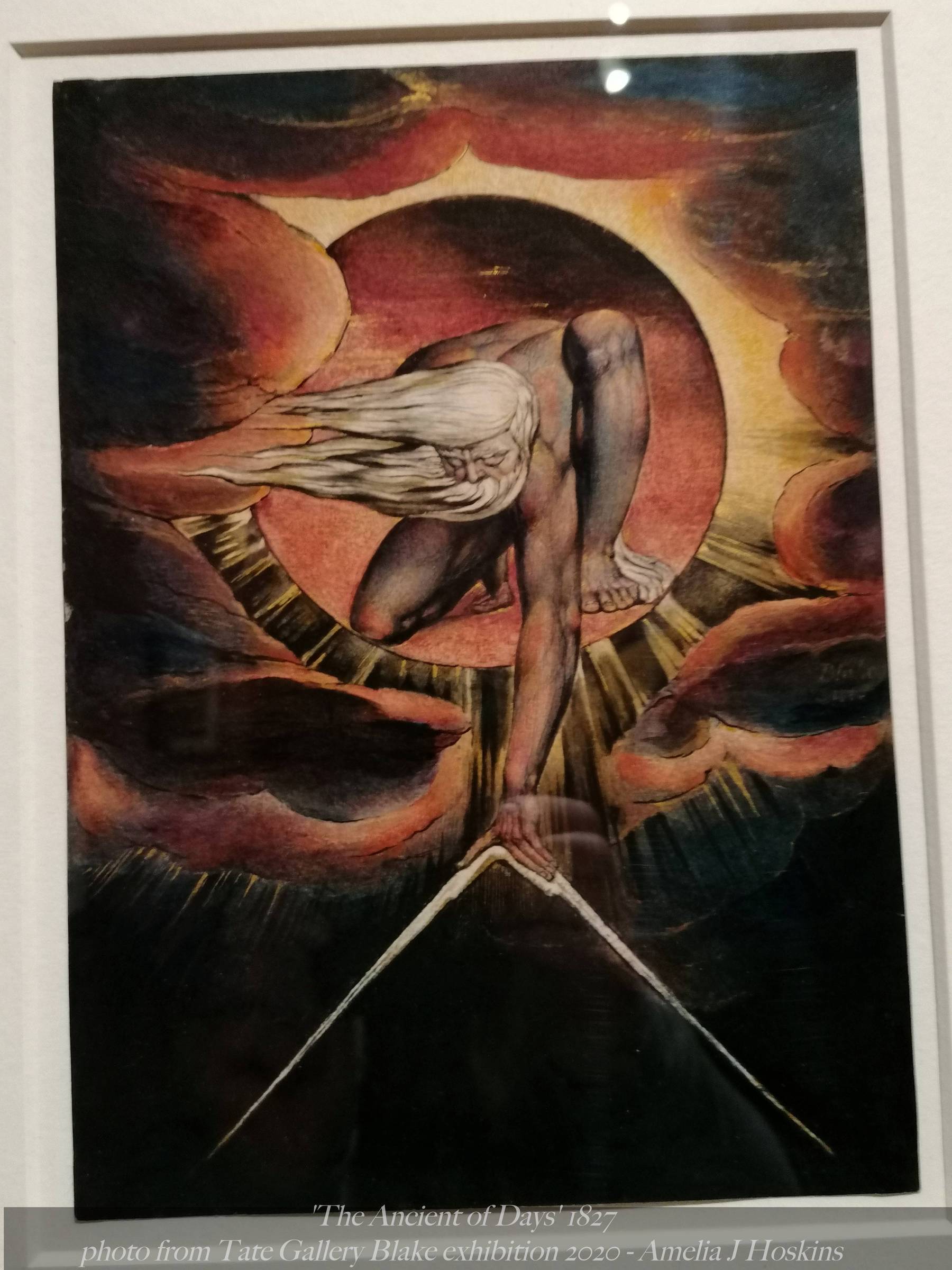 Blake and Milton warned of a technocratic age of scientific 'reason' devoid of spirituality.  [quotes Milton, Blake?] One idea of heaven and hell, good and bad times; is that they will always come, in different forms.  Tyranny of the people we know from history.  Poets, artists and philosophers consider the quality of life and the state of the world.  Psychologist, Jordan Peterson wrote Maps of Meaning which includes ideas from Blake.  He is a popular lecturer as people are refreshed by the idea of having a focus on meaning in their lives in a highly technocracized world.

Peterson studies religion and totalitarianism.  The figure of Satan to Blake and Milton is one of humanity believing itself divine with ownership of science.  Peterson interprets Milton's Paradise Lost - When people are denied their mythological history it leads them  "to gravitate towards nihilism, or as a counter position, to totalitarianism". (in the C20th)  In the background the existentialists were looking for ways to avoid ideological totalitarianism.  Peterson says 'We know the next step is mass murder'.

"The immediate consequence, from Milton’s perspective, was that as soon as Satan decided that what he knew was sufficient, and that he could do without the transcendent—which you might think about as the domain outside of what you know—immediately, he was in hell. I was studying totalitarianism when I read Paradise Lost. I thought the true poet, like a prophet, is someone who has intimations of the future. Maybe that’s because the poetic mind—the philosophic or poetic mind—is a pattern detector."

~ Jordan B Peterson - From essay in thehumandivine.org

Peterson lecture:  What We Should Learn from Milton’s Paradise Lost

Milton is incorporated into the corpus of christianity. Milton tried to justify 'being' to human beings. Satan is an intellectual figure, the 'evil scientist motif'. The human intellect falls in love with its own productions.  Milton’s hypothesis was that the element of the psyche – the spiritual element of the psyche that characterised the rational mind – would, by its proclivity to produce these totalising systems, end up casting itself into Hell. 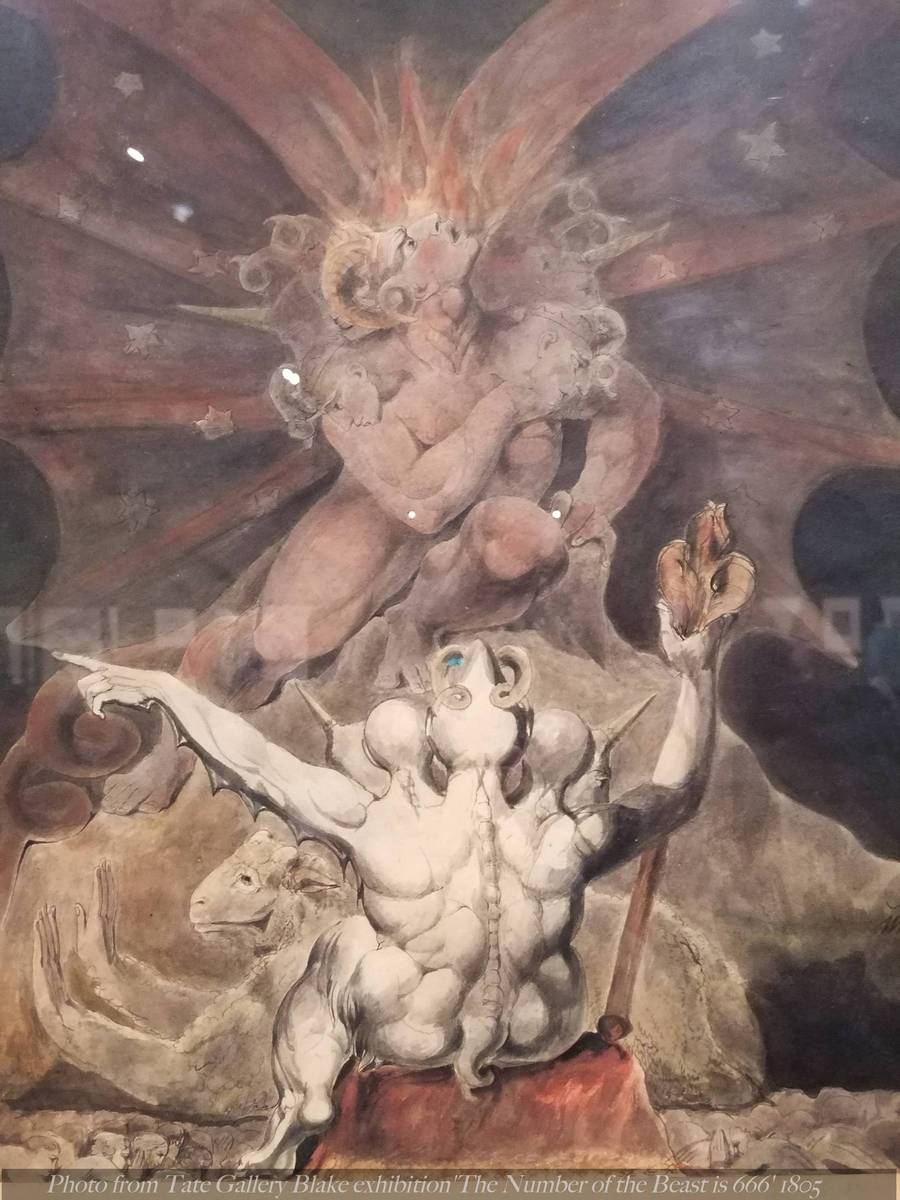 The Number of The Beast is 666

This image would not be out of place in 2022.  The lamb in the painting is the 'lamb of God' with human hands signifying the people below which appear as a flock of sheep.  The white satan may represent  consciousness of the original 'good satan angel' who points in an opposite direction to the focus of the dragon winged 'bad satan': this would fit with ‘coincident oppositore’.

"Milton did the first psychoanalytic study of malevolence and evil. God’s highest Angel, who was Satan, Lucifer, the Bringer of Light, the Spirit of Rationality, tormented a rebellion against God in Heaven and was cast into Hell as a consequence. …Satan, as the highest Angel in God’s heavenly Kingdom, is a personification of the tendency of the Rational Mind to produce totalitarian systems and then to fall in love with them ."

Blake ‘coincident oppositore’  is the unity of opposites . Blake unifies body of God with body of satan.

Blake hides his political commentary within the biblical stories, as parables, almost as a political cartoonist.  He removed text from God of Light.  Censorship is nothing new and he was almost imprisoned for his beliefs and associations.  He was a radical 'dissenter' who also moved in Freemason circles: as a politically thinking man would need to know the plans of the day.  We cannot know exactly the oppressiveness of his time.  He would have agreed with Swedenborg's ideas of dismantling the overarching power of church as State, but not the dismantling of Christianity in total.

Religion no longer has a central place in society as it did in Blake's time when he read the Bible avidly as a child, and as an engraver made many Biblical illustrations, both his own and commissions; being a popular subject for the new printing of the age.  Being consistently against powerful organised state religion he wasn't afraid to ridicule the Pope in his art.

The Pope is chained to Lucifer; unable to escape evil, while Kings who have followed the Pope lie in the depths of hell. interesting to note Lucifer has scales as part serpent.  Evil is often seen in Blake's art as a serpent engulfing men who have succumbed to evil; seen here as one man falls into hell. 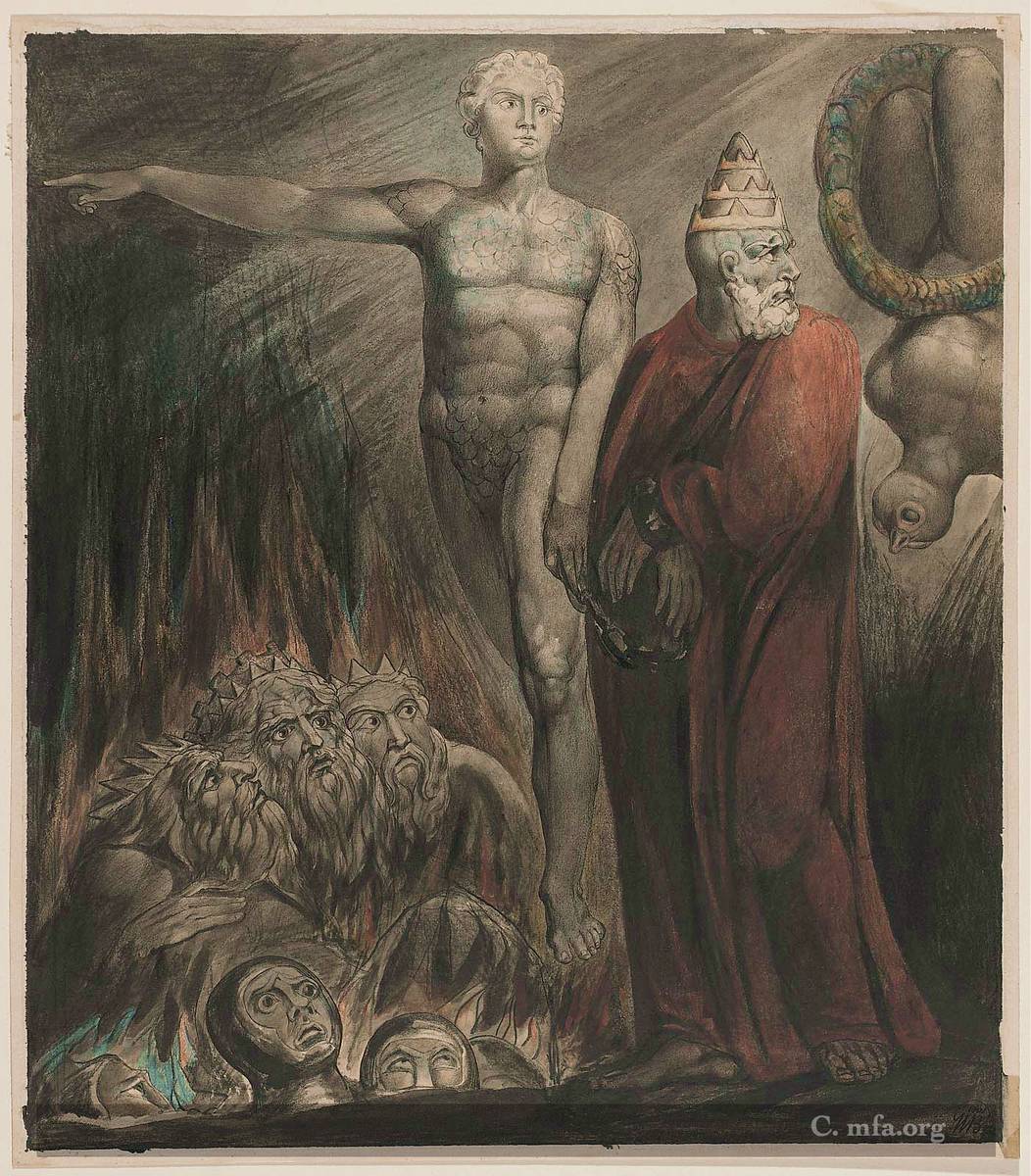 Serpents are poised ready to attack Vanni Fucci, as he seems to defy God.  The flames of hell are not far away.  Innocent angelic ladies are often depicted observing events, which may signify Blake's respect for women, who we know he was always ready to champion if a woman was in harm's way.

~ Dr Zelenko.  Interview on Infowars  A modern statement on the times where the serpent is big pharma.

Ian McGilchrist in his book 'The Matter of Things' extrapulates the reason behind thinking in terms of all life having contraries in dipolar force to make a whole.  He discusses the need for meaning and putting reason back into the world Iain McGilchrist: The Coincidence of Opposites

[to continue... writers on conjugates and link MU holons]